Some girlfriends and I have been doing somewhat-regular themed pot luck dinners for a little while - and by somewhat regular I mean three in about a year. The first one we did was Spanish theme, the second Turkish and the latest one was Japenese. I'm pretty lucky to know a bunch of awesome cooks and everyone puts in a lot of effort for these sort of evenings to make something original and delicious, that everyone will enjoy. We always have way too much food. And probably way too much wine, but that's another story,

I chose to make gyoza (Japanese dumplings) and a cucumber salad. I've never made gyoza before, but I love to eat them when I eat at Japanese restaurants.

What I like about this recipe is that it's easy to find all the ingredients - you do need to get the gow gee wrappers, but I just went to an Asian supermarket and asked for dumpling wrappers. I still have no idea what gow gee wrappers are and whether that's what I got or not. 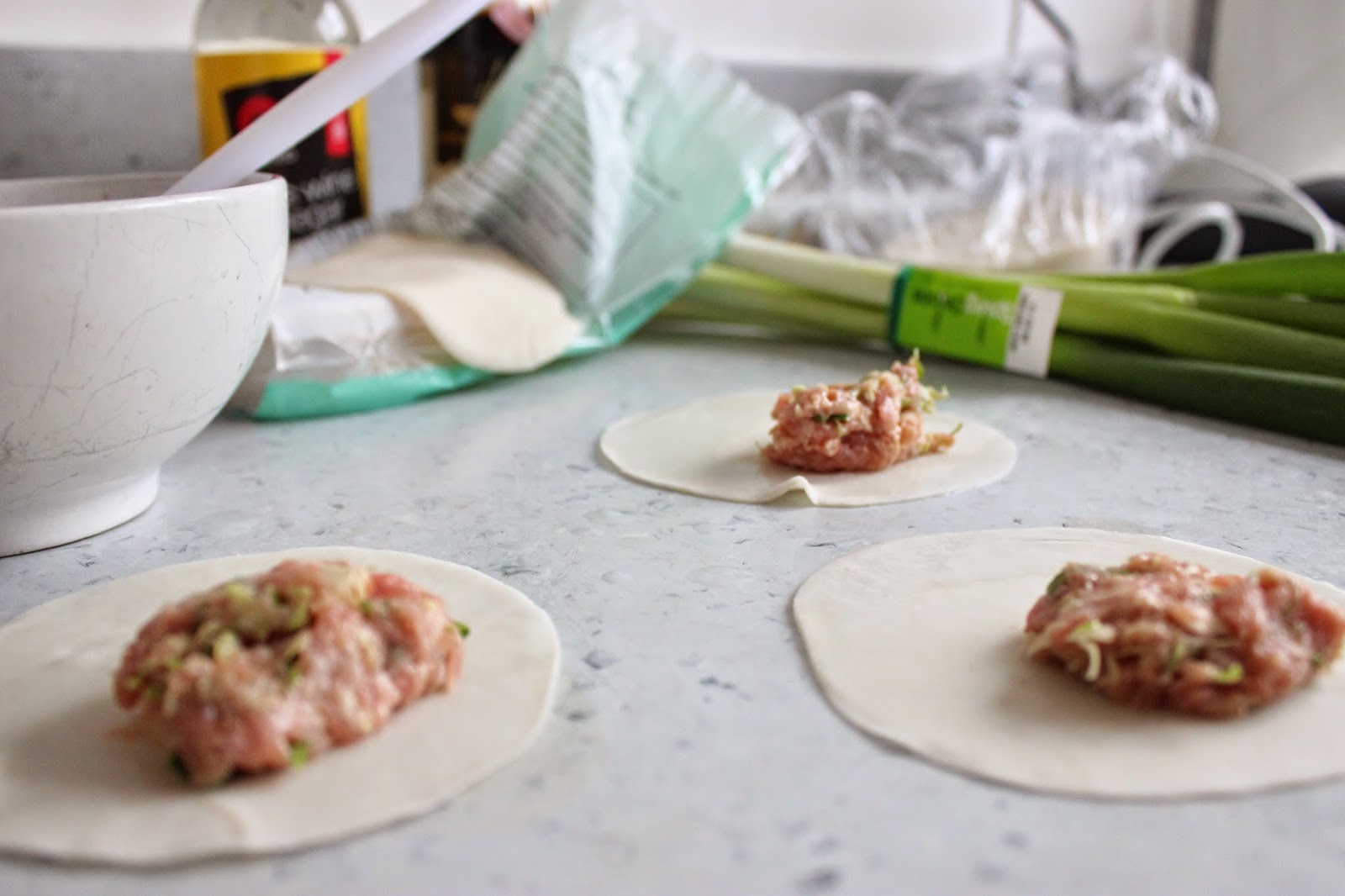 For the dipping sauce:

Put the mince, cabbage (I shredded mine using the food processor to get it really fine), sesame oil, soy sauce, ginger and garlic in a bowl and combine, I found it was easiest to just use my hands. I didn't do it this time, but I think the addition of some fresh herbs, like coriander, chives or parsley would be really good. Lay out a few wrappers on the bench about put about 1 heaped teaspoon of mince mixture in the middle of each wrapper. Brush the edges with a some water and folded them over and pressed the edges together. Super easy!

I cooked them when I got to the dinner venue, so they'd be nice and fresh. Heat half the vegetable oil in a large frying pan over a high heat. I turned the heat down to medium and fry as many as you can fit in the pan for a couple of minutes until the bottoms are nice and crispy. Then add half a cup of hot water and put a lid on and let the dumplings cook for about 4-5 minutes. Add more water if you need to, but I found it was pretty much the right amount and had almost completely evaporated by the time they were cooked. When they're ready, just scoop them out and pop them on a plate.

For the dipping sauce, combine the teriyaki sauce with the sesame oil and give it a stir, and then slice the spring onion over the top and you're ready for delicious Japanese noms.

The cucumber salad never eventuated because I forgot - I took all the ingredients with me but didn't put it together - whoops. 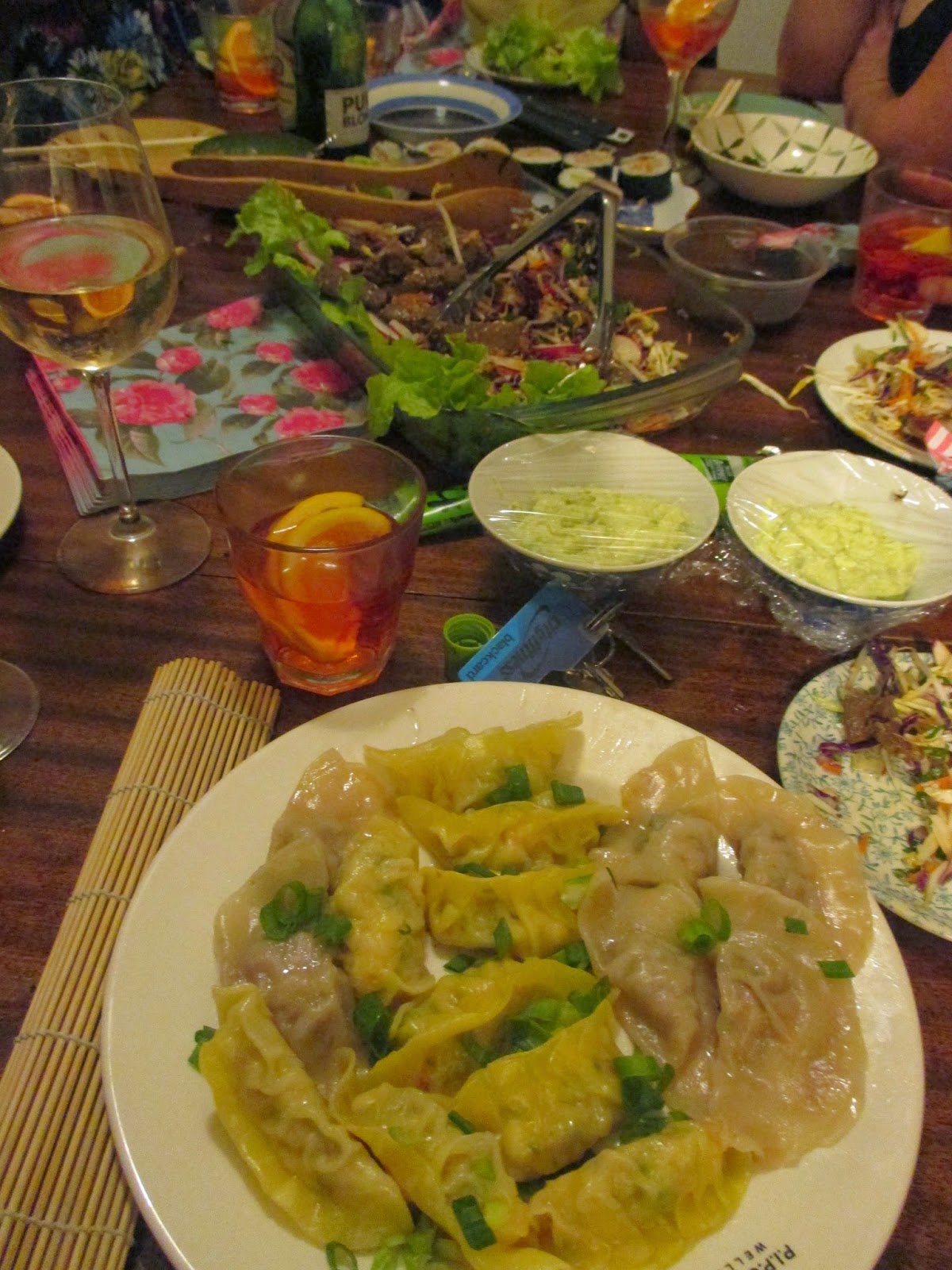 In case you were interested, also at the dinner (there were 7 of us) we had sushi, prawn gyoza, a crunchy salad with beef, salmon fillets with a wasabi mayonnaise, karaage (basically deep fried chicken) and a really amazing green tea cheesecake. Everything was so delicious and I'm already looking forward to the next time. Any suggestions on a theme?

Em
Spent 8 years travelling and living around the world, returning to my homeland of New Zealand at the beginning of 2013. I love sunshine, travelling, cooking, eating, wasting time on the internet, tattoos, meeting new and interesting people, movies, riding bikes, yoga, the beach, indie rock, organising things and people, taking pictures, laughing and books - and this blog is about all those things...as well as some other stuff. All photos are taken by me and are my property, unless otherwise credited.